I’ve been doing some heavy work on MongoMapper lately. It all started with a StackOverflow question, which led to a Rails developer user asking me what I thought of Mongoid vs MongoMapper. I’ve been using MM for ages, and was happy enough to offer a favorable opinion of it. But, I wanted to back up my assertions. I wrote a benchmark. It…was disappointing.

This touched off a huge amount of work which resulted in some extremely large bugfixes, massive improvements to MM’s document read speeds. Here’s how it happened.

Know Where You Come From

Initially, my goal was to prove the MongoMapper was approximately as fast at Mongoid at common use cases. I wrote a quick little benchmark, along the lines of this:

Nothing too fancy. But, imagine my dismay when I got the results:

How I Learned To Stop Worrying And Love The Benchmark

One of my favorite tools for performance analysis is kcachegrind. I use Windows as my desktop, and do my development on a headless Linux server. Fortunately, kcachegrind is cross-compiled for Windows. There’s also a OS X equivalent called qcachegrind for the Mac users out there.

I cut the benchmark down a bit for the purposes of iteration, and added ruby-prof profiling. This gives us something like:

So now we know where we start - about 1730 microseconds per document load.

ruby-prof comes with support for cachegrind dumps baked in. I’ve written about it before, so I won’t cover it here. Instead, let’s just look at what kcachegrind says.

Surely we can improve that. That sounds like a good place to start.

MongoMapper uses a plugin architecture that starts with a basic implementation of a set of methods on each document, then allows plugins to override them and call super to add additional functionality. This is nice because it helps encourage good separation of concerns, and it makes it easy to treat functionality as separate modules for the purposes of debugging. Unfortunately, this also means that a given module might not only be running the code that it thinks it is.

MM does its document loads in keys.rb. This is pretty straightforward - it takes a hash of attributes, and for each attribute, calls a setter that sets the value and allows MM to do its typecasting magic. Easy, right?

Well, almost. Because of the plugin architecture, our “private” method write_key turns out to do an awful lot of work! 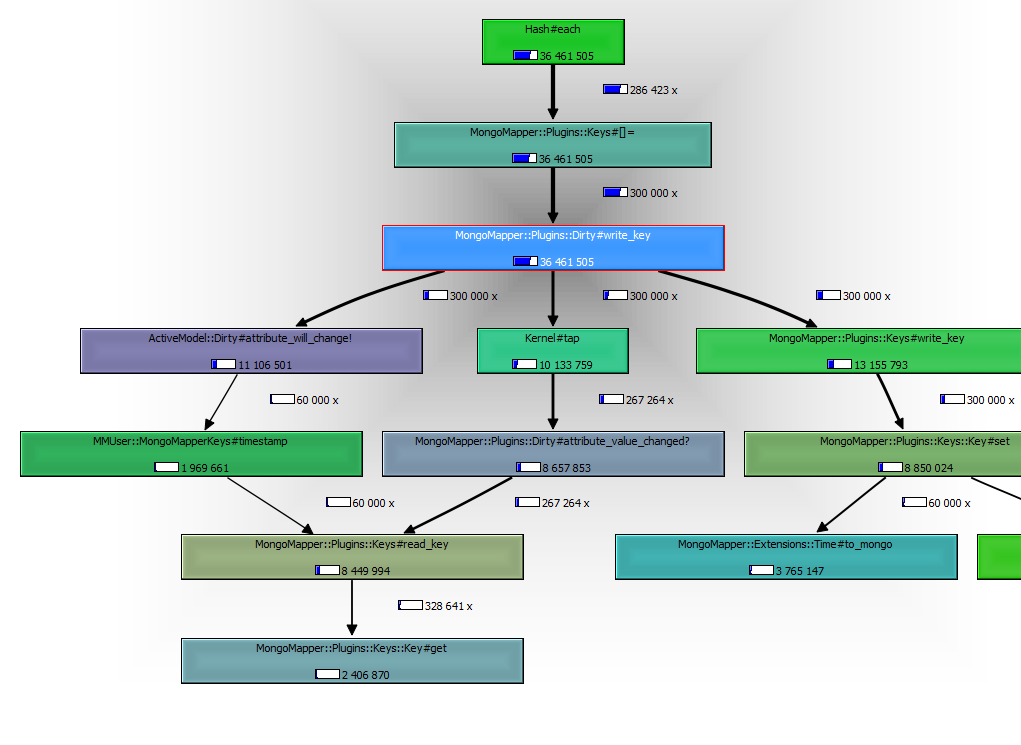 Uh-oh. I think we found the source of our read_key calls. What’s happening here is that MongoMapper’s dirty attributes functionality overwrites write_key so that whenever a key is written, its old value is read (that’s the read_key call), and is then compared to the value being written. If the values mismatch, then the field is marked dirty. But this is a database load! We don’t need plugins to be able to modify and act on the data - we just want our data to be set on the document.

The solution I went with was to split this into an internal_write_key method and an overridable write_key method. When loading from the database, Keys is just concerned about getting the object populated. So, load_from_database now calls internal_write_key, and we changed write_key to do the same, so we have a consistent plugin interface, but bypass letting plugins get their hooks into the data as it’s being read out of the DB.

Not too much, right? Let’s see what it does to performance:

Not bad! Just cutting out the excessive reads and extra overhead due to Dirty#write_key improved our load time from 1730usec to 872usec - cutting our runtime in half. But we can do better!

Plucky 0.5.2 had a bug in it that would cause cursors to be iterated twice when reading. This basically meant that MM had to parse twice the data per document load. Let’s relax the Plucky reference:

That brings us to:

Down to 443 usec per document load. Getting much better now!

Looking at a fresh callgrind trace, we see that we’re still spending a LOT of time in write_key (which we expect; this is a read-from-the-database test after all), but perhaps that can be optimized?

write_key is spending a lot of time in Keys#set. However, the reason that Keys#write_key calls Key#set is to cast the incoming value to a Mongo-friendly type. But, we know that we’re already coming into this with a Mongo-friendly type! We’ll add a parameter to internal_write_key that prevents it from trying to perform a cast in this case:

Well, that won’t do; Ruby provides a key? method on Hash already.

We’re making a lot of calls to the instance and class-level #keys methods. Perhaps those can be streamlined away.

(This was actually a much more involved change, but it’s simplified for purposes here)

There were a number of other changes, refactorings, and improvements made, and even more tested and discarded, but the fundamental procedure remains the same - measure, use those measurements to find a line of attack, and improve. The test suites will help you discover if you’ve messed something up, and your benchmarking tools can help you improve your runtimes by finding and eliminating unnecessary code paths.

In the end, we ended up with something like this:

Down from 1730 usec/document to 192 usec/document, a gain of ~9x, making it competitive with Mongoid. At some point it becomes difficult to do an apples-to-apples comparison, as Mongoid uses the Moped driver to talk to MongoDB, while MongoMapper still uses the 10gen Mongo driver, so there is a divergence in terms of what each ODM is doing under the covers.

This is just the tip of the iceberg, but it’s the core of the optimization pass. In the process of making these changes, I converted the test suite to rspec, made embedded associations lazy-loaded, added finer-grained control over document marshalling, added ActiveRecord-style block syntax to document creation, added key aliases, and more.

All of this work and more has gone into getting MongoMapper back into the race in terms of speed, and I’m proud to say that the 0.13.0.beta1 release has been published and is looking great so far. If all goes well, then we’ll be pushing 0.13.0 soon, which will be the last release in the 0.x series. Once that happens, we’ll be merging in Rails 4 compatibility, making some backwards-incompatible improvements to embedded associations, and more. Onward, to the future!